Although Oklahoma had its share of middle class black citizens, not all, nor even most African Americans enjoyed a stable economic existence. As was so common across the cotton belt, many Oklahoman farmers were sharecroppers. In 1930, Oklahoma had 22,937 black farmers, 14,559 of them tenants. Meaning that 77% of black farmers in Oklahoma were landless and at the mercy of the landholders.[1] From the Collapse of Cotton Tenancy, “The status of tenancy demands complete dependency; it requires no education and demands no initiative, since the landlord assumes the prerogative of directive in the choice of crop, the method by which it shall be cultivated, and how and when and where it shall be sold. He keeps the records and determines the earnings. Through the commissary or credit merchant, even the choice of diet is determined. The landlord can determine the kind and amount of schooling for the children, the extent to which they may share benefits intended for all the people. He may even determine the relief they receive in the extremity of their distress. He controls the courts, [and] the agencies of law enforcement.”[2]   New Deal programs relief programs often excluded or shortchanged African Americans who were already the hardest hit group in the nation. Old Age Pensions were not available to agricultural or domestic workers, jobs held by 90% of black workers.[3]Oklahoma, the fourth most economically impacted state in America, found its federal relief aid was totally suspended several times during the 1930s, due to lack of cooperation with federal agencies by state officials, and the absence of matching state funds, making it difficult for blacks in the state to receive food or cash aid.[4] Already the most marginalized of workers in the US economy, sharecroppers, both white and black, were devastated by the Roosevelt Administration’s New Deal Agricultural Adjustment Act (AAA) of 1933. The lawmakers who designed the AAA were attempting to raise cotton prices by removing land from cotton production. To decrease the amount of acreage of cotton planted the AAA paid parity checks to planters who agreed to take land out of production. 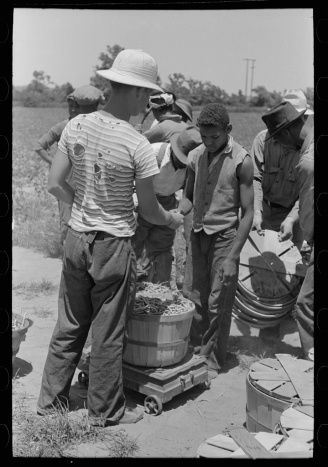 White and Black field workers, picking green beans. These people are working side by side, despite what much of the publicized record led people to believe. Lee, Russell, photographer. Receiving check for string beans picked at scales in field near Muskogee, Oklahoma. Muskogee Oklahoma, 1939. June. Photograph. Retrieved from the Library of Congress, https://www.loc.gov/item/fsa1997026442/PP/. (Accessed October 29, 2017.) 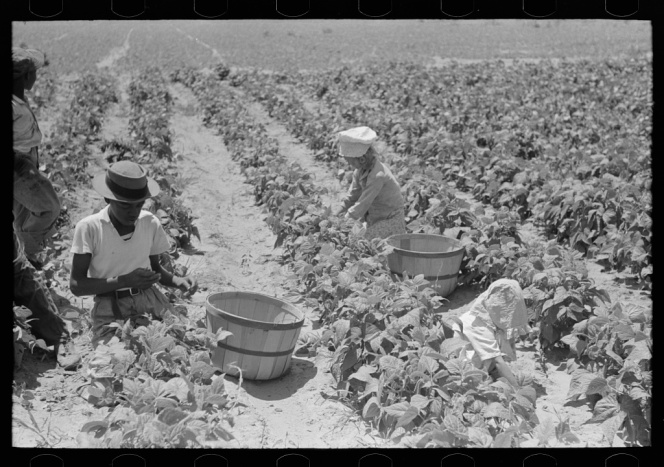 Interracial migrant work crews. Jim Crow did not matter to the plantation owners during work hours.

The AAA was written with a halfhearted attempt to protect the rights of the workers’ including the direction that parity checks were to be split with tenants and sharecroppers, and that all effort must be made to retain tenant and sharecropping farmers in their homes. Without the necessity of cheap labor there was no incentive for plantation owners to “furnish” tenants with the food and clothing that they needed to survive, and the AAA was so full of loopholes that the plantation owners could easily evict thousands of tenants leaving them homeless, penniless, and adrift.[5] Howard Kester described the AAA as “the greatest inequity since the “Bo ‘evil” that economic monstrosity and bastard child of a decadent capitalism and a youthful Fascism.” The AAA was so flawed that by 1937, the head of the Agricultural Resettlement Program offered an apology for the “unfair treatment of the Race tenant and sharecropper” and said that the agency had a “sincere desire to remedy the injustice.”[6] One estimate said that at least one-third of rural unemployment in the nation was caused by the AAA.[7] The AAA, bears much more responsibility for “Okie” migration than the dust storms. 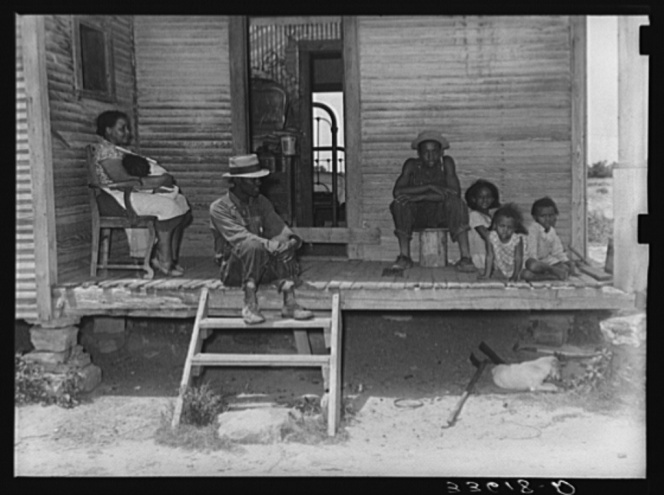 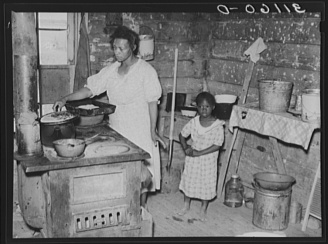 We accept the above images as normal or typical of the experience of some Americans. This is how things were. but we collectively recoil from the following images. Why? 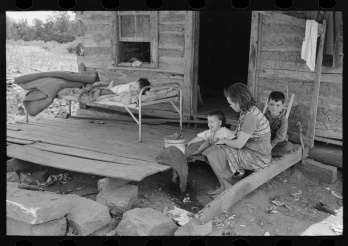 The white families in these photographs were not new to poverty, they lived and worked side by side the black families viewed above, and yet we the viewer perceive their lives as a temporary result of the Great Depression, and not examples of generational American poverty.

An editorial in the African-American newspaper The Plaindealer, a black newspaper published in Kansas City,  confronted the negative attitude towards African Americans who were looking for fair treatment under President Roosevelt’s alphabet agencies formed during the New deal to help Americans deal with the crisis of the Great Depression. “People want a new deal, at least they say they do. One wonders whether they mean it or not—they talk one way and act another. Often, they seem to betray a woeful lack of the implications of a NEW DEAL. They can actually think in terms of a new deal for themselves without any thought that it must also be a new deal for others.” The writer went on to quote Reverend Pipkin, a black Oklahoman, who delivered a speech in which he stated, “’There can be no new deal without a new deck. Too many people are trying to get a new deal with the same old deck, and with the same old methods of dealing out the deck. The NEW DEAL must be new in more ways than one, and the benefits must flow in both directions.”[10]Many African Americans had faith in the New Deal and the presidency of Franklin D. Roosevelt in particular, and we can see from the quotes above that the disappointment in the administrations’ false promises was deeply felt.

This photograph was cleverly  framed to convey to the viewer a complex message that was vital to securing aid for poor African Americans in the United States . The oval hanging on the wall, and the mirror  looks like thought bubbles in a cartoon. We as the viewer are to understand that this woman is a patriot, and that her love of the President proves her Americanness. We are also to know that she is also a DESERVING American, one who is poor because of circumstances and not bad choices. She sits demurely, hands in her lap, gaze down-submissive- under the presidents’ paternal and protective gaze. Her apartment, though obviously worn down, is clean, and tastefully decorated. This presentation contradicted the prevailing racist idea of black women as promiscuous, aggressive, and dirty, reasons which were used to justify the denial of aid for African Americans.